An amazing new Mars image captured by the Hubble Space Telescope shows clouds, craters, ice caps and other features on the Red Planet.

Hubble took the photo on May 12, when Mars was just 50 million miles (80 million kilometers) from Earth. That’s quite close in the cosmic scheme of things; Mars is nearly at “opposition” — when the planet and the sun are on exact opposite sides of Earth from each other — which will come on May 22. 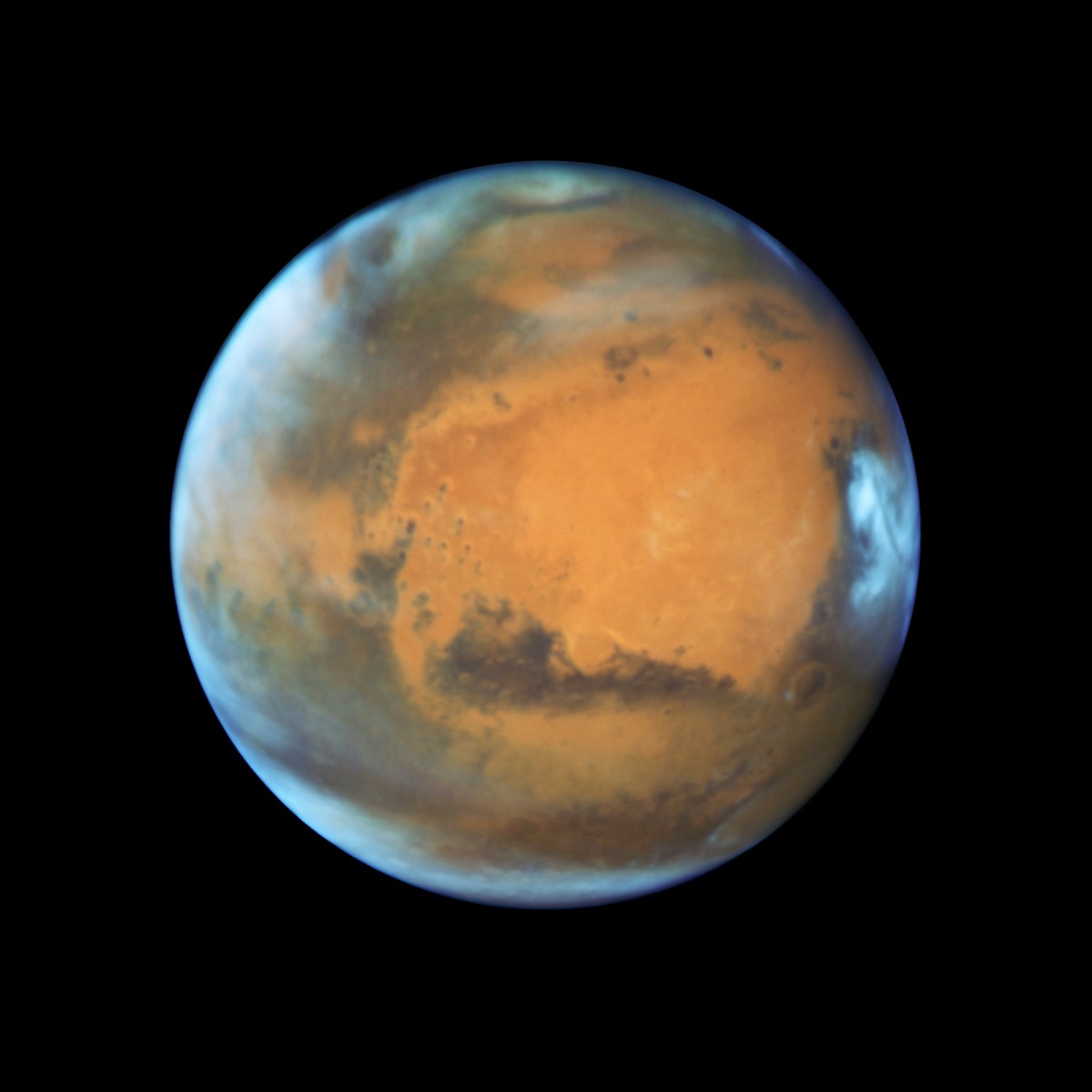 Mars as it was observed shortly before opposition in May 2016 by the Hubble Space Telescope. Some prominent features are clearly visible, including the heavily eroded Arabia Terra in the center of the image and the small southern polar cap. Credit: NASA, ESA, the Hubble Heritage Team (STScI/AURA), J. Bell (ASU), and M. Wolff (Space Science Institute)

Opposition “marks the planet’s closest approach to Earth, so that Mars appears bigger and brighter in the sky than usual,” European Space Agency officials wrote today (May 19) in a description of the newly released photo. (The Hubble mission is run jointly by NASA and ESA). “This event allows astronomers using telescopes in space and on the ground to see more details on the Martian surface.” [The 7 Biggest Mysteries of Mars]

The dates of closest approach and opposition don’t mesh exactly. The closest approach will actually come on May 30, when Earth and Mars are separated by 46.8 million miles (75.3 million km).

The average time between Mars oppositions is about 780 days; the last time Earth, the Red Planet and the sun all lined up was in April 2014. And some closest approaches are closer than others. In 2003, for example, Mars came within 34.65 million miles (55.76 million km) of Earth — the closest the two planets had been in 60,000 years, ESA officials said.

The new Hubble photo, which the telescope took with its Wide Field Camera 3 instrument, shows a natural-color view of Mars in which mountains, plains, canyons, craters and many other geological features are visible. 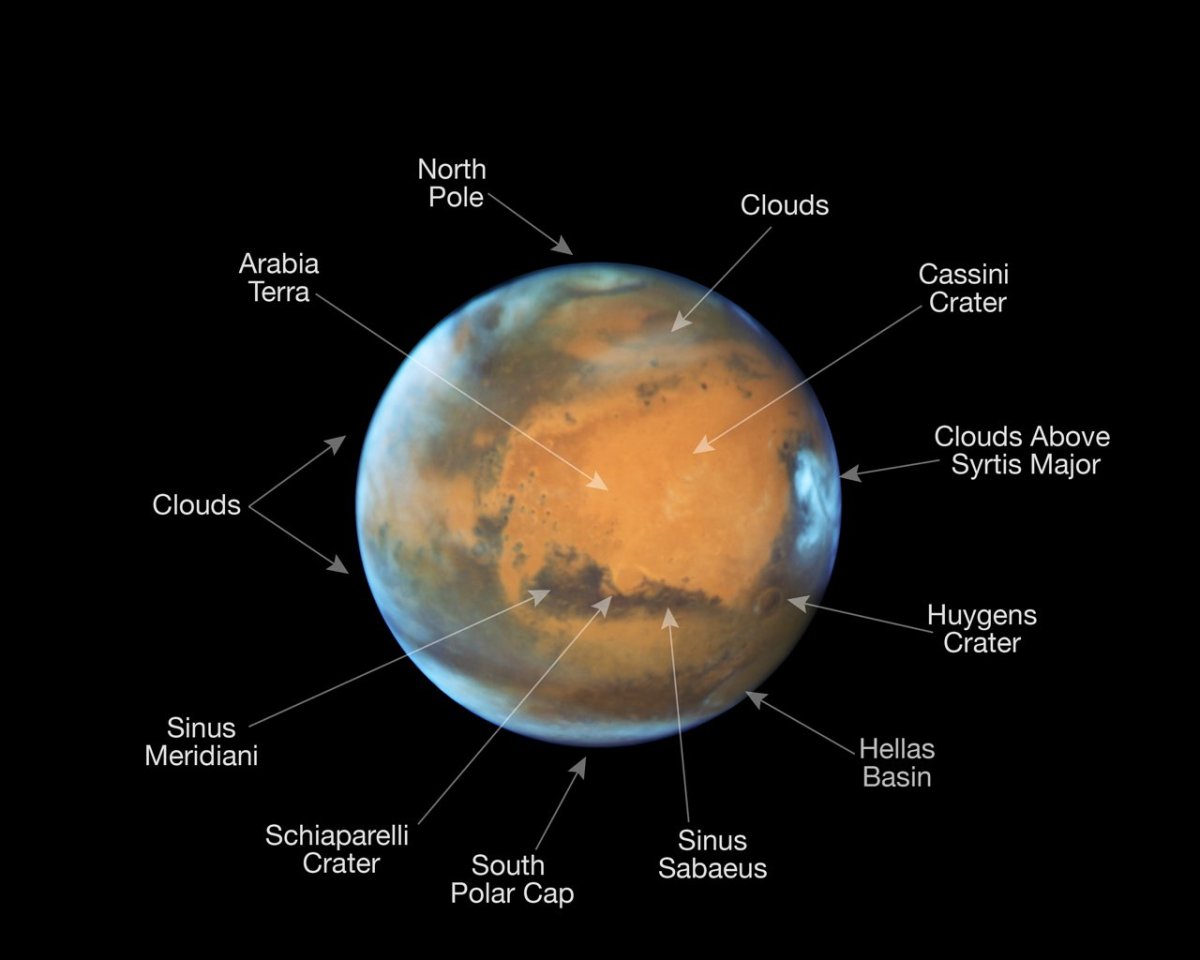 Annotated view of Mars as it was observed shortly before opposition in May 2016 by the NASA/ESA Hubble Space Telescope. Credit: NASA, ESA, the Hubble Heritage Team (STScI/AURA), J. Bell (ASU), and M. Wolff (Space Science Institute)

“The orange area in the center of the image is Arabia Terra, a vast upland region,” ESA officials wrote. “The landscape is densely cratered and heavily eroded, indicating that it could be among the oldest features on the planet.”

“South of Arabia Terra, running east to west along the equator, are the long, dark features known as Sinus Sabaeus (to the east) and Sinus Meridiani (to the west),” they added. “These darker regions are covered by bedrock from ancient lava flows and other volcanic features.”

Clouds blanket the dark volcanic plains of Syrtis Major, on the right side of Mars, and cover the extensive south polar ice cap as well. (The northern ice cap is quite small, because it’s currently summer in Mars’ northern hemisphere.)

Hubble launched in April 1990 aboard the space shuttle Discovery. Spacewalking astronauts repaired its flawed primary mirror in December 1993, and the famous telescope has been helping astronomers make big discoveries ever since. Barring any unforeseen events, Hubble should keep operating through at least 2020, and perhaps longer, NASA officials have said.