The Rocket Man Who Wants To Beat the Billionaires

Dave Masten stares at his computer screen, finger poised over the mouse button. He knows that opening this email, sent by the Defense Advanced Research Projects Agency, the Pentagon’s advanced technology lab, will change his life. One way or the other.

This email is the fulcrum of his future. It is either an acceptance letter or a rejection letter for his company’s proposal to build what DARPA calls XS-1: an experimental unmanned space plane that can fly ten times in ten days, reaching a speed of Mach 10–plus and lifting payloads greater than three thousand pounds to orbit, at a cost of no more than $5 million per flight. Being accepted as one of the three competing contractors represents the best shot that Dave Masten—perennial underdog, Silicon Valley refugee, scrappy space-industry entrepreneur—will have to build a working spacecraft. It would mean an immediate infusion of $3 million, with more coming the next year. The final contract could be worth as much as $140 million.

Being rejected would mean the status quo: toiling in the desert in continued obscurity, with a thin profit margin and languishing dreams of building orbital spacecraft. It would also be the loss of a rare opportunity. Historically, government launch programs favored—if not outright mandated—spacecraft that could return to Earth on a runway or under parachutes. But Masten’s rockets use a vertical-takeoff, vertical-landing design—no runway or parachute required. The XS-1 program allowed for this design. There was no telling if the government would continue the allowance for future launch programs. This could be his only chance.

One email, two roads. One leading straight to space.

Except it’s not entirely empty. The western United States is home to the R-2508 Complex, the epicenter of American military aircraft training. F-16 Fighting Falcons, F/A-18 Hornets, and F-35 Lightning IIs from local air bases and training centers tear through twenty thousand square miles of protected airspace, just as Chuck Yeager did when he broke the sound barrier here sixty-eight years ago.

“THEY STARTED OFF TRYING TO BUILD A 747, BUT WE HAVEN’T EVEN FIGURED OUT HOW TO FLY YET.”

Though closed to passenger planes and private flyers, the airspace is open to tenants of the nearby Mojave Air and Space Port, which was certified as the country’s first commercial spaceport in 2004. Masten moved in that same year, after Cisco Systems bought the startup where he was working as a software engineer. He had his choice of several empty buildings. He picked a beat-to-hell former Marine Corps barracks from the 1940s with a leaky roof and crawling with black widow spiders. It was perfect. The twenty-foot ceilings were plenty high enough for the launch vehicles he was designing—just him and the three guys working for him. Even better, he secured several launchpads from which to fly his fleet.

For the next few years the only people who knew Masten Space Systems existed were a handful of industry insiders and fellow spaceport tenants—which included some of the biggest names in the private space business, like industry forefather Scaled Composites and Richard Branson’s Virgin Galactic and Paul Allen’s Vulcan Stratolaunch Systems, their massive hangars housing pieces of manufacturing equipment that cost more than the entire net worth of MSS. But then in 2009 the company won a $1 million NASA-sponsored lunar lander competition, and suddenly it had a little recognition and a lot of business. Its rockets were regularly hired out by NASA, the Department of Defense, and top universities for high-altitude experiments and research.

MSS gained even more respect after being selected as one of the three XS-1 competitors. The other two: mega defense supplier Northrop Grumman and Boeing. And not only them. Boeing was working in partnership with Blue Origin, the aerospace company belonging to Jeff Bezos, while Northrop Grumman was working with Scaled Composites and Virgin Galactic. MSS, meanwhile, had teamed with another tiny Mojave firm, XCOR Aerospace. So to build his company’s first spacecraft, all Dave Masten had to do was beat out the most advanced, well-financed aerospace firms in the world. And he had just thirteen months before the next round of judging. 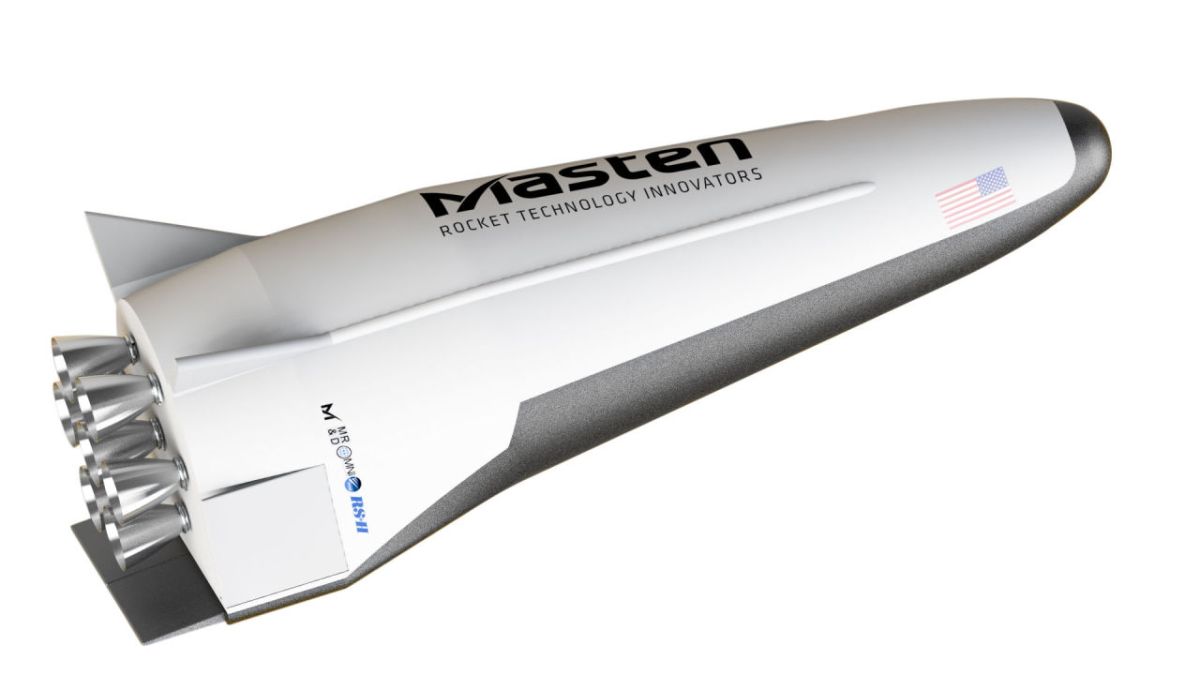 This past August, just a couple weeks before the announcement of those results, Masten recounts the day of that fateful email over breakfast at the Voyager Restaurant, on the ground floor of the spaceport’s administrative building. It’s a greasy spoon on the spaceport grounds that doubles as a shrine to the seventy-two-year-old founder of Scaled Composites, Burt Rutan, and is named after his plane, Voyager,which in 1986 became the first aircraft to circumnavigate the globe without stopping or refueling. A map of this quest covers one wall.

The commercial space industry is dominated by outsize ambition: Rutan, Branson, Allen, Bezos, Elon Musk. Each considers himself to be a true avatar of the future of spaceflight. Masten is different. He’s from Cleveland, for one thing. He doesn’t evangelize. He doesn’t want to be bothered with micromanagement and self-aggrandizement. His title at the company he founded is chief technology officer, not chief executive officer. He’s plainspoken. Not antagonistic or antisocial. He’d just rather be working than giving interviews is all. He eats his omelet quickly and then it’s right back to the garage.

It is only slightly less ramshackle than when Masten took it over. The roof still leaks, and you still have to watch out for black widows. Tool chests line the walls, which are bare except for company banners, a whiteboard filled with equations, and an American flag. In the middle of the hangar is a Masten rocket called the Xaero-B, standing on four spindly metal legs with two large spherical tanks stacked atop each other. One tank is meant for isopropyl alcohol fuel, the other for cryogenically chilled liquid oxygen. Another ring of tanks circles its waist: canisters of helium, used for the reaction control system thrusters that help orient the vehicle. The engine at the bottom is gimballed to give the threadbare insectoid craft the ability to steer.

Several employees attend the craft, prepping it for an upcoming experiment by the University of Colorado, Boulder, to prove that spacecraft can communicate with ground-based telescopes and thus help find exoplanets.

Masten’s small company and its location attract a certain kind of dedicated, badass engineer–mechanic. “I interned at Boeing in the 777 propulsion department,” says Kyle Nyberg, twenty-six. “Good people, good company. But I got very restless sitting in an office all day. I assumed the next forty years of my life would be spent like that, and it really freaked me out. In a small, scrappy company like Masten, the engineers are given both the pleasure and frustration of fabricating their designs with their own hands. It’s very uncommon.”

He and his coworkers wear T-shirts that say MOON FIRST, a core company belief about the best destination for NASA’s next mission and another way in which Dave Masten differs from the industry’s famous billionaires. While most of them dream the big dream of open access to space and the fantastical future that comes with it—intergalactic vacations and Mars colonies and all that—he advocates more utilitarian aims.

“They started off trying to build a 747,” he says of his contemporaries, “but we haven’t even figured out how to fly yet.”

Masten’s primary focus has always been devising rocket vehicles meant for carrying supplies, not astronauts or tourists—the spacecraft equivalent of semitrucks that might one day cart oxygen and hydrogen from the lunar surface to some Lagrange point filling station between Earth and the moon. This is why his rockets use a vertical- takeoff, vertical-landing design. “It’s the one landing method I’m aware of that applies to every solid body in the solar system,” he says. “You can’t land an airplane on the moon.”

Vertical takeoff and vertical landing are also key to reusability. Some of Masten’s rockets have flown hundreds of times, and they can be readied for relaunch in less than a day. The XS-1 competition goal of ten flights in ten days? That’s approaching routine for Masten. The other two teams haven’t done it once. 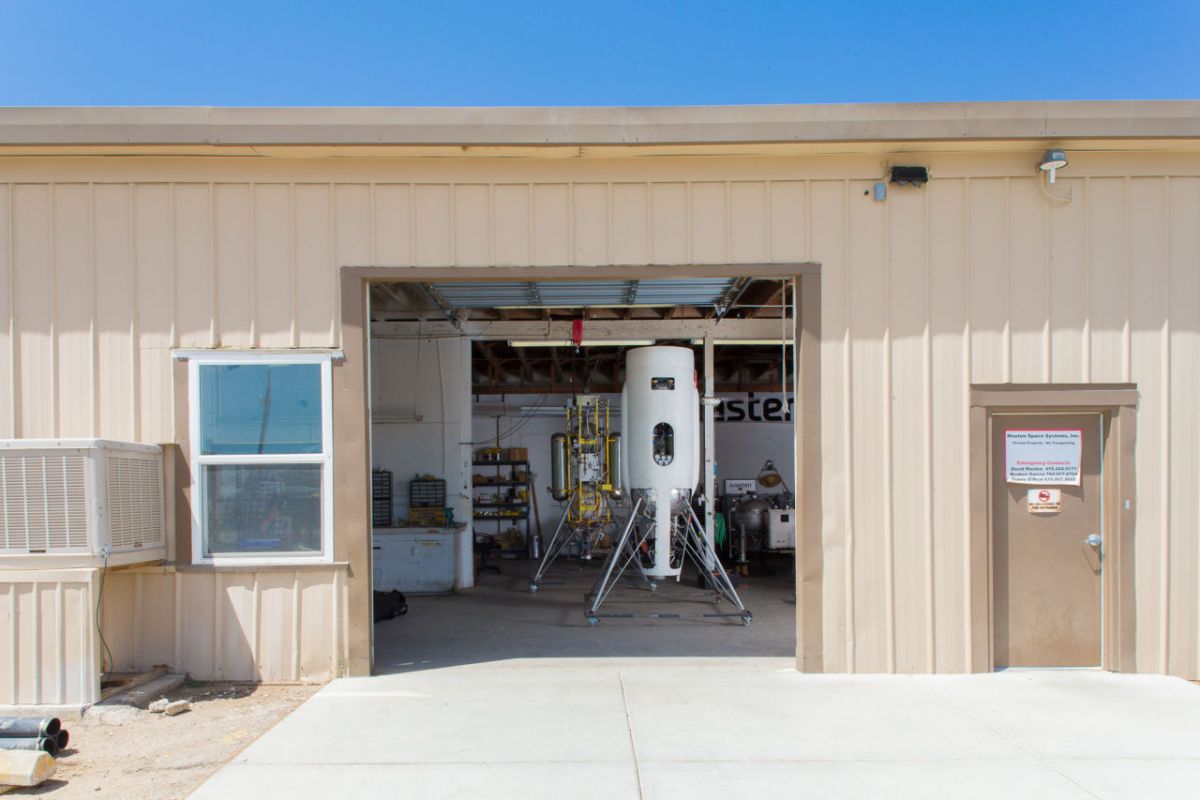 A couple weeks later DARPA would announce that all three teams were advancing to Phase 1B of the XS-1 competition, for which they’d each receive an additional $6 million. Phase 1 focused on design and infrastructure plans—i.e., prove you can do it. Phase 1B is devoted to flight tests, compiling related data, and further design work on the aeroshell—prove how you’ll do it. The results of Phase 1B are expected next summer, with the first XS-1 orbital mission to take place as early as 2018.

Whatever the outcome, Masten’s simply making it this far has vast implications for the private space industry. “It changes the game,” says Hannah Kerner, a former NASA engineer and the executive director of the Space Frontier Foundation. “DARPA has not only opened up the playing field for commercial space companies but has recognized these newer, agile companies as serious players.”

Even without the XS-1 contract, MSS can’t really claim also-ran status any longer. In August it opened an office at Cape Canaveral, the Florida space center that is reinventing itself as a crucial hub for commercial launch companies. There MSS resides in the same strip-mall business park as SpaceX, not far from one of the key gates into Kennedy Space Center.

Still, Masten Space Systems is undermanned and underfunded, a ragtag bunch out in the desert, drilling and hammering and soldering in their small badlands garage down the block from the rich folk. They’re still the ones to root for. 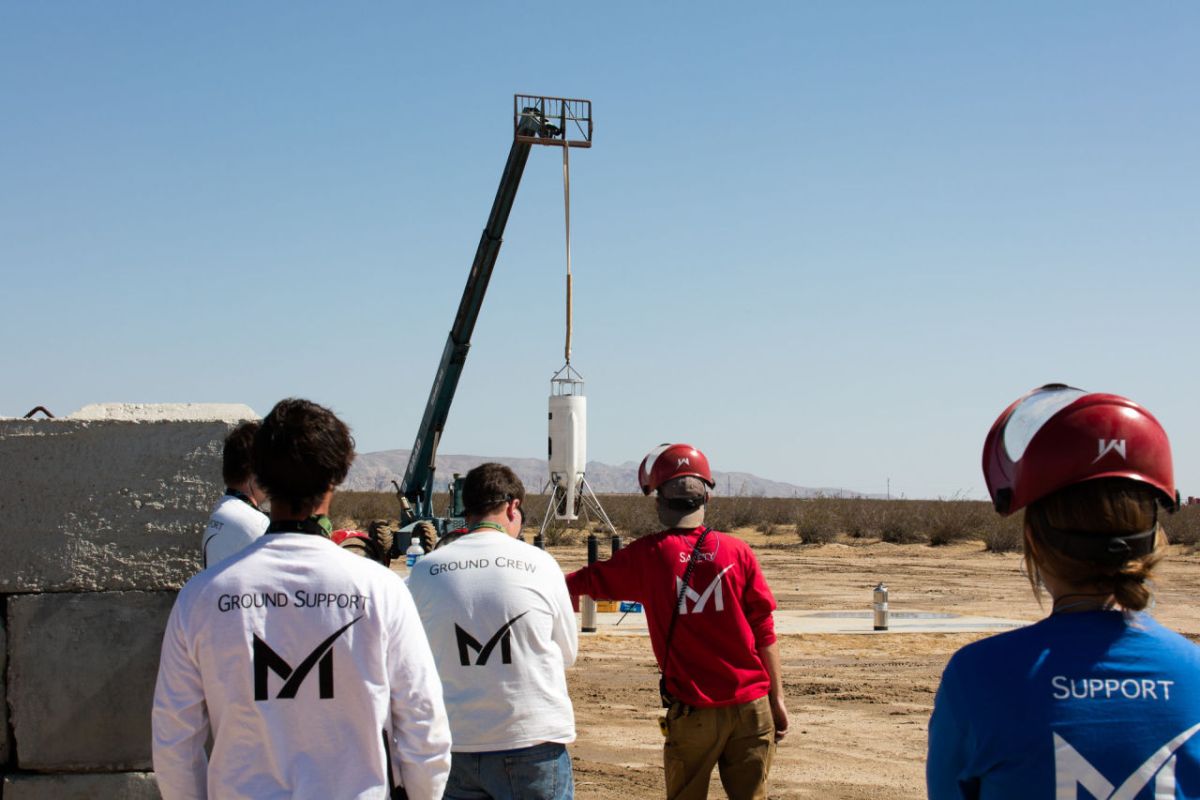 “I think we can be competitive,” is all Masten would say about his chances in XS-1. It would do him no good to overpromise anything—something other space-industry upstarts have a habit of doing. Some great men speak greatly, and it is that ability that helps them be great. Masten is the other kind of great. Quiet. Hardworking. Understated. But, in his own quiet way, as insatiable in his desire for progress as the rest of them.

In the garage a sonic boom, courtesy of a military jet high above the desert, cracks like an overhead cannon shot. Dust sifts into the air and the warehouse’s metal doors rattle. Masten doesn’t even flinch.